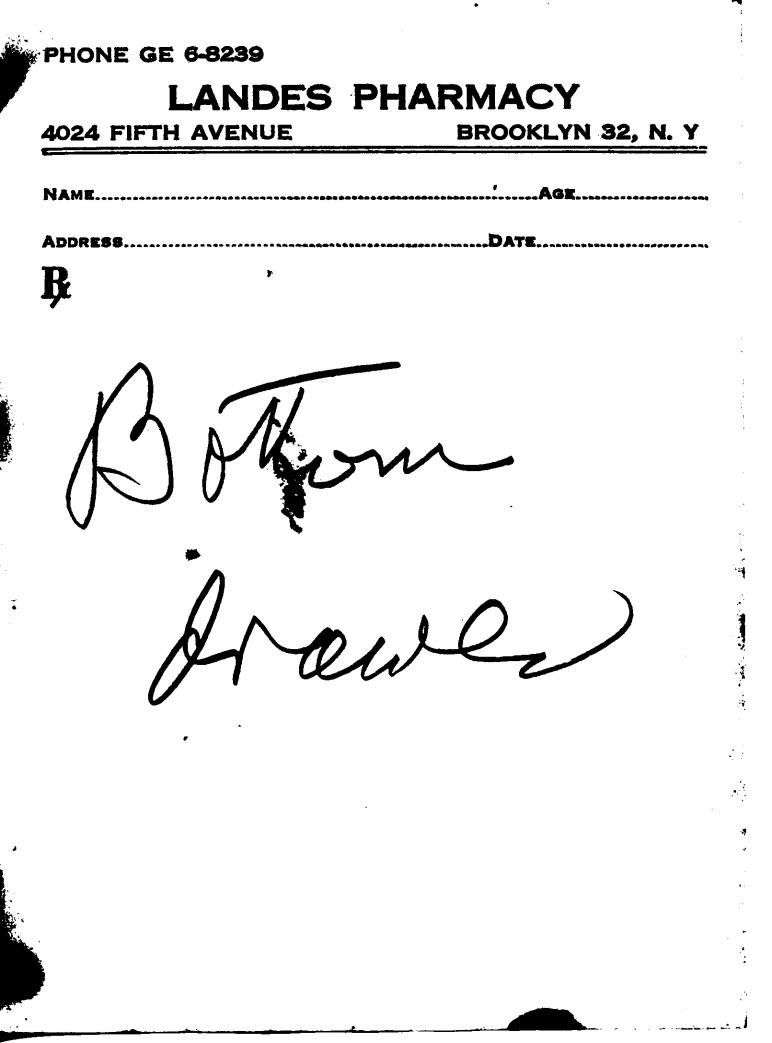 At least two generations of the Landes family were involved in the pharmacy industry in New York City. When Moses Landes settled in Manhattan after passing through Canada on the way from England and initially Romania, he noted his occupation has a stand keeper, and on his death certificate, he was listed as having worked at a candy store. But just a couple of years after he was living in New York, his son Joseph was moving forward with his career.

Joseph’s work continued with his son Herbert, and for a time, with his other son Mortimer.

On May 21, 1902 at Brooklyn College, Joseph Landes passed the examination given by the Eastern Branch of the (New York) State Board of Pharmacy for the degree of licensed pharmacist and received his pharmaceutical certificate.

By March 1910, Joseph, living in Manhattan, was working as a pharmacist at 11 First Avenue, also in Manhattan. He was operating his store under the registered trade name Alo-Lax Chemical Company. He was also later a director and vice president of Sealeaf Emulsion Company, which was, probably after Joseph’s involvement, fined $50 for advertising unproven health benefits of a chocolate cod-liver oil product.

Before his death, Joseph had moved his operations to 4024 Fifth Avenue, Brooklyn, under the name Landes Pharmacy. When Joseph died, his obituary was printed in Volume 43 of Practical Druggist and Pharmaceutical Review of Reviews:

Joseph Landes who conducted a drug store at 41st Street and Fifth Avenue, Brooklyn, died recently aged forty-five years. He was well and favorably known to the drug trade as treasurer of the Bay Ridge Retail Druggists Association and as member of the New York Retail Druggists Association. He was also a member and organizer of the First Berauer, K. N. V. [sic] He is survived by a widow and three sons.

I’ve come to the conclusion that the printing of “First Berauer, K. N. V.” was probably a misreading of First Bacauer, K.U.V., the organization (landsmanshaft) that supported — or was intended to support — immigrants from Bacău, Romania, as well as relatives still living there. K.U.V. is an abbreviation for the Yiddish that translates roughly to “sick and benevolent association.” This would therefore mean that Joseph considered himself to be from the town of Bacău in Romania, and possibly that he and his siblings lived there before emigrating to North America by way of England.

It’s likely he was born in Iași like his brothers and sister, but perhaps he identified his childhood with Bacău. First Bacauer K.U.V. did not pay for his burial or the burial of any other Landes, but at first glance, the organization did not seem to have any money.

Joseph’s widow, Sadie Lustig Landes, was the proprietor of the store after Joseph’s death, and Herbert and Mortimer later operated or worked at the store.

After Sadie passed away in 1964, it appears that the family sold the business.

The store that contained the pharmacy became known as Bi-Rite Drugs after the new owners filed for incorporation with New York State on 17 May 1965. Bi-Rite moved between 1997 and 2007 to its final location at 4013 Fifth Avenue, and today, Bi-Rite Drugs is out of business.

Towards the top of this post is a page from the prescription pad from the Landes Pharmacy, provided by Joan Landes Norton who discovered the paper deep in a file cabinet. You can see the store’s phone number is GE 6-8239, the same number (718-436-8239) that stayed with the store for at least fifty years, even after the store changed locations and owners following the death of Sadie Lustig Landes.

The photograph here is how the storefront appeared in 2013, courtesy of Google Maps Street View. Even in this photograph, if you look at the bottom of the sign noting the storefront is available for rent, you can see the last few digits of the same phone number that stayed with the store since the Landes family arrived in Brooklyn.