Skip to content
Mere days after ordering a copy of naturalization papers for Anna Lipansky Kerstman from the National Archives, I received Anna’s documentation in the mail. The delivery was in a flat, letter-sized envelope, a feature I appreciated over the thrice-folded records received from New York City, creased to fit in a number 10 envelope.

Not only was I impressed with the form, but I appreciated the content as well. The documentation affirmed the date of naturalization for both Anna and as her husband, Isidore (Isadore) Kerstman.

I’ve been recording Anna’s maiden name as Lapinksy or Lupinsky so far, but the naturalization and immigration documents include her last name as “Lipansky.” Anna’s marriage certificate, which I should be receiving soon, has an index wherein the last name is spelled “Lipiansky.” English spelling was not as important a century ago as it is today, and slight variations depended on whoever happened to be the scribe.

Anna’s birthplace is listed as Yanova, Kovna, Lithuania, which I’ve identified as the town now known as Jonava, Lithuania. The following is from JewishGen about the town of Jonava, an excerpt from Beginning, Growth and Destruction by Itzchak Judelvitch:

Janowa was a small town, inhabited by some 4,000 people, located north-east of Kovna. The town was situated on the main highway, on the crossroads of the railroad, the highway and the river which connected it with both Russia and Germany. Janowa sat on the banks of the Vilia River (Nerys, in Lithuanian) — a wide body of water which starts north-east of Vilna and has its outlet in the Nieman river in Kovna. The railroad trains from Liboi on the Baltic Sea would pass through on a high steel bridge east of the city on their way to Romani in the south of Russia. A wooden ferry boat connected both sides of the St. Petersburg-Warsaw highway. This ferry crossed the width of the river from bank to bank and transported people and vehicles…

Unlike most of the Lithuanian towns, Janowa was economically and demographically well established. A special type of personality developed in this atmosphere — healthy specimens of masculine strength who lived by the sweat of their brow–people who attended the synagogue on Saturday and did strenuous physical labor on week days, who knew how to deal with the neigh[b]orhood rowdies–whether it was just “innocent boisterousness” of drunkards on market days or actual attempts at rioting bearing a deeper significance. There was also a wealthier sector of the population, people of education and culture; among them those who were educated in the modern sense — successful in business and concerned with community affairs.

Jonava experienced two fire-related disasters, but Chiene was born between the two. She would have lived through the devastating fire in 1905. Chiene and her family stuck it out. She left for America by way of Rotterdam in 1911, leaving her mother, Rochel (later, Ruth) behind. The naturalization documents pointed me to her date of arrival in New York, which I confirmed with Ellis Island records including her ship’s manifest.

According to Philadelphia incoming ship manifests, here is a Rochel Lipianski who arrived later that year in Philadelphia from Konow (Kaunas), Russia (Lithuania), which would have been the same region as Jonava. You can see how close Kaunas is to Jonava in the map above. Rochel was accompanied by a daughter named Kreine. They left behind Rochel’s sister (or sister-in-law) Chiene in “Janowy” — that is, Jonava. They were destined for their friend Frank Batkin (I’m not positive on the reading of his name) in Brooklyn. Rochel, Kreine, and Chiene could be Anna’s mother, brother, and aunt.

This, like all other new documents I receive, seems to lead to more questions and more research. 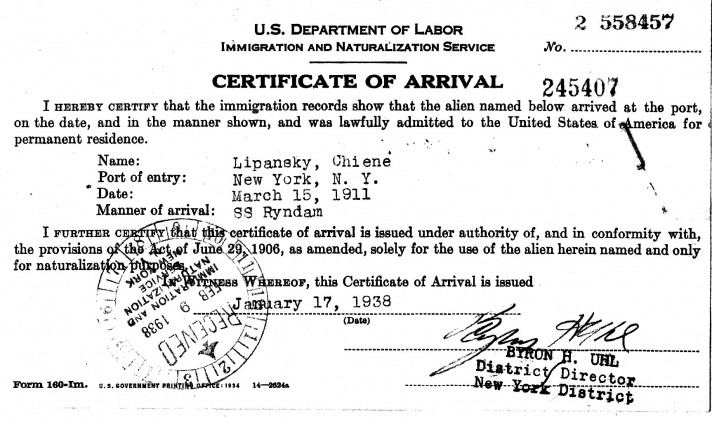 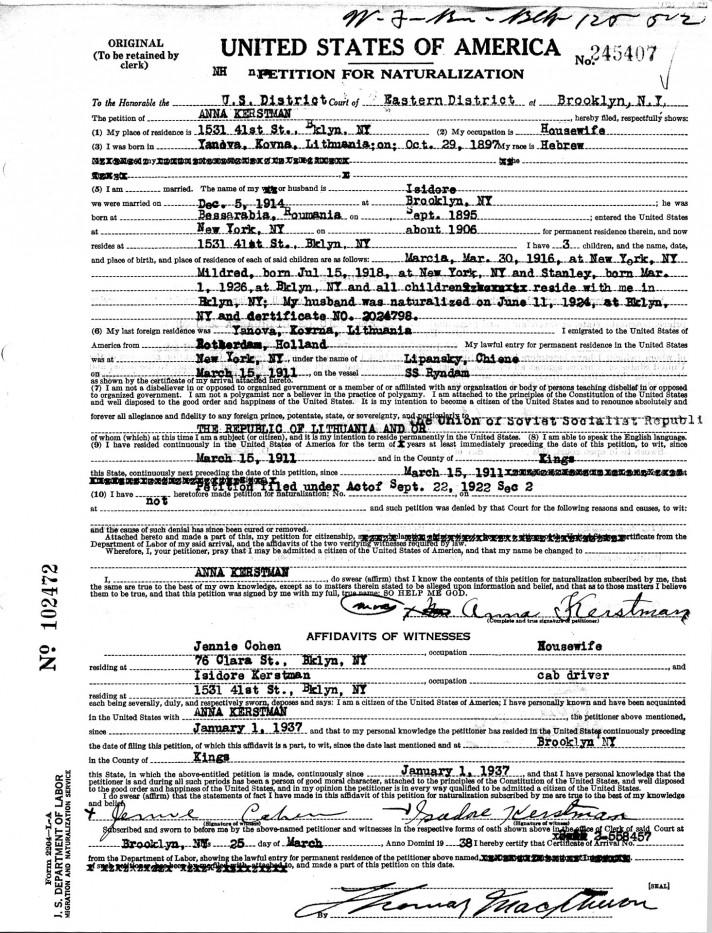