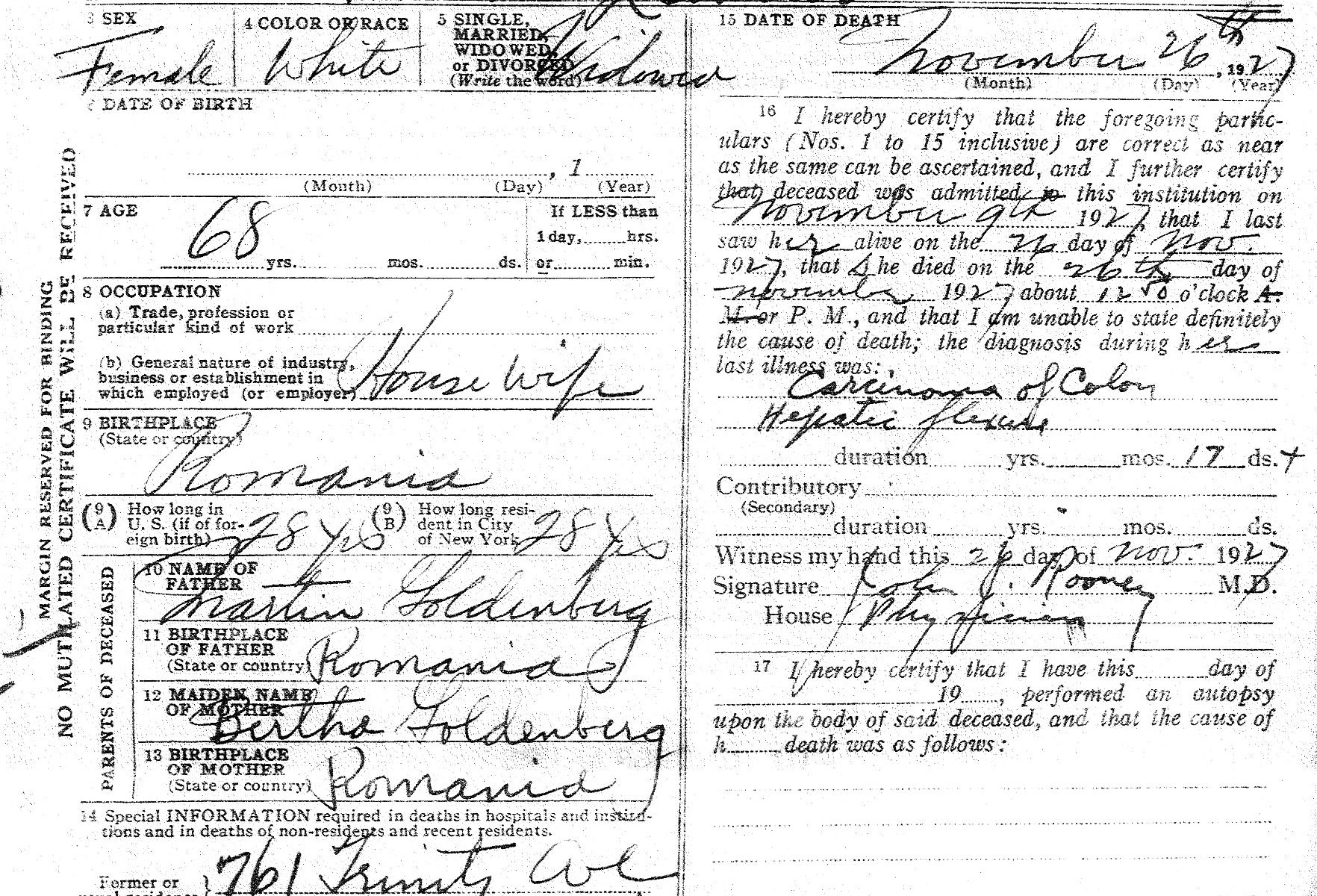 I’ve been writing about the last three death certificates I’ve received in decreasing order of confidence. The latest as of today is the death certificate registered by the Department of Health of The City of New York for Bertha Landes. Bertha, whose maiden name is Jereslawitz according to the marriage certificate for her son Joseph Landes and Sadie Lustig, died on 26 November 1927 at Roosevelt Hospital in Manhattan, where she had been for 17 days, and the doctors did not identify a cause of death.

Let’s look at each fact and determine whether it helps or hurts the likelihood that this death certificate pertains to my second great grandmother.

Occupation: housewife. This matches all other documentation for Bertha, but I’m not awarding any points for this being correct.

Birthplace: Romania. It’s well-documented that the Landes family immigrated from Romania to the United States and Canada. Census records all list Romania as the birthplace for Landeses who were not born here. One point.

Former or usual address: 761 Trinity Avenue. This is in the Bronx, and I have no evidence of any of the Landes family living at this address at any time. Without a 1925 New York Census record for Moses, Bertha, and their son Charles, I looked at 761 Trinity Avenue in that database, browsing the images. The Landes family was not enumerated at that address in 1925. With this curiosity, I’ll take away one point.

Place of burial: Mount Carmel Cemetery. Other members of the Landes family are buried at this cemetery: Fannie Landes (Paltiel) Goldenberg and her second husband Adolph (although there’s a possibility this grave is a different Adolph and Fannie Goldenberg with a Romanian background), Joseph Landes and his wife Sadie, and Charles Landes and his wife Clara. According to his death certificate, Bertha’s husband Moses is buried there, as well. Neither Moses nor Bertha show up in the Mount Carmel Cemetery interment search. A visit in person is required to verify the burial location. I’ll award a point for this burial information.

Names of parents: Martin Goldenberg and Bertha Goldenberg. First of all, it’s unlikely that Bertha Jereslawitz Landes’s father has a different last name than her own maiden name. Secondly, it also seems unlikely that the daughter shared the same given name as the mother. Finally, the last name matches the last name of Fannie Landes’s second husband, Adolph. I can’t give any points for this information, because no other information I have proves or disproves it, and because Bertha’s father’s last name of Goldenberg doesn’t make any sense at the moment.

Like the other death certificates I’ve received recently, perhaps this is just the case of bad information. According to the second page of the death certificate, the undertaker was employed by “Mr. Landes,” Bertha’s son. I expect it would be Charles, who lived with Moses and Bertha the longest, but the first name is not specified. Of Bertha’s other two sons, Joseph died two years prior and Martin was likely living in Detroit at the time. Perhaps the informer was Bertha’s son-in-law, Adolph Goldenberg. If Adolph was the person providing this information, perhaps he gave the names of his own parents when asked, explaining why Martin Goldenberg and Bertha Goldenberg were listed as the deceased’s parents.

The death certificate’s score is five and a half points. The points don’t mean anything, so they don’t determine whether this certificate represents the Bertha Landes in my family. There are other Bertha Landeses living in New York, but not at the right time or at the right age, according to census record indexes. I will accept this into the family tree, but I won’t add Bertha’s parents as listed on the certificate.