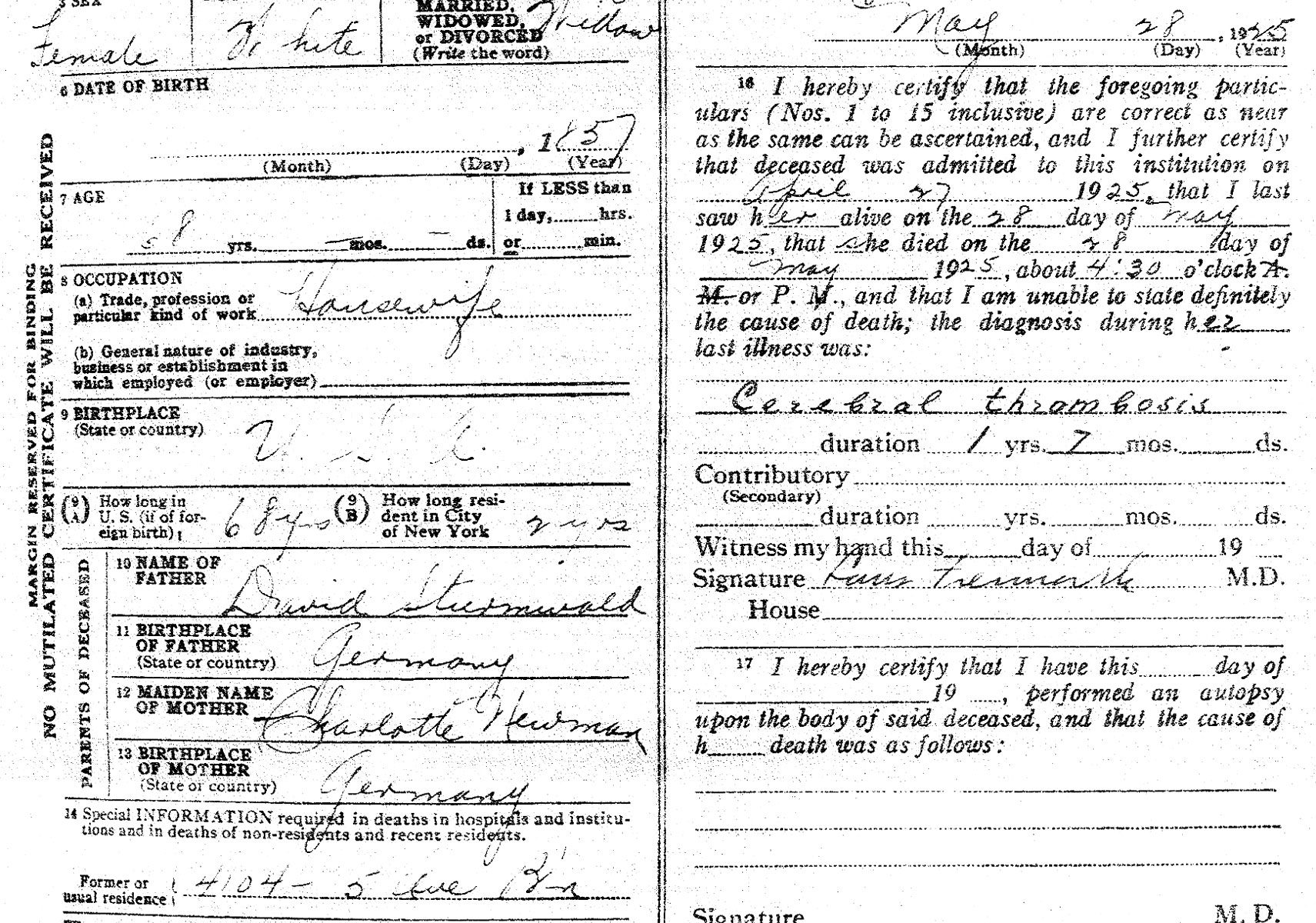 With every new document I receive, there are more questions. Earlier this week, I received three new death certificates I ordered over the past month or so, but I’m having trouble confirming that these certificates apply to my relatives.

The certificate with which I have the most degree of confidence is the one for Eliza Sturmwald Lustig. The date of birth matches what I’ve found in a few census records, but there are other census records, both Federal and New York, that conflict with this information. The address on the certificate leads me to believe this document has a 100 percent probability of relating to my second great grandmother. The “former or usual residence” is listed as 4104 Fifth Avenue in Brooklyn, and the census records point to my confirmed relatives living at this address at the time of Eliza’s death.

What is throwing me off is Eliza’s mother’s maiden name. On the death certificate, it is listed as Charlotte Newman, with the location of birth of Germany. According to the certificate for Eliza’s marriage with Joseph Lustig, Eliza’s mother’s name is Janetta Shyck. I can understand if the individual who is reporting the personal information to the city can’t recall precise names, but I would expect memory to not be incorrect by such a wide margin. Janetta Shyck is far removed from Charlotte Newman.

Furthermore, the second page of the death certificate indicates the undertaker was employed by Eliza’s son, Sam Lustig. Eliza did not have a son named Sam. It’s common for information on death certificates to be wrong, but it just doesn’t make sense.

There is one more confusing statement on the death certificate.

According to this record, Eliza has been a resident of the City of New York for only two years. Perhaps this is simply the number of years Eliza has been living in her present location; the census records do not disagree with this conclusion. Eliza’s death would have occurred just days before the 1925 New York Census enumerator would have knocked at her door. The census records indicate her surviving family members were living at 4104 Fifth Avenue in Brooklyn, the same address on the death certificate. The Federal Census in 1920 lists Eliza living with her family on East Third Street in Manhattan. So if the question were simply misunderstood, it’s likely that the answer of “2” just refers to the number of years living at the current address.

Even with the discrepancies, the residence listed on the form gives me enough confidence to include this record. There is little chance of the Eliza Lustig at 4101 Fifth Avenue not being the Eliza Lustig I’ve already shown to be my relative. I’ve also added to my official family tree the mystery mom Charlotte Newman as an additional wife for Eliza’s father, David Sturmwald. I’ll continue researching in an attempt to discover evidence of Charlotte Newman.

I’ll also need to focus on the death certificates I’ve received for Joseph Lustig and Bertha Landes to determine if these are relevant. Those certificates seem to have more inconsistencies with established facts.

This article offers some insight about the expected inaccuracies on death certificates. It’s not uncommon for the informant to be misinformed — or grief-stricken — and prone to providing information that results in troubling and confusing reconciliations for genealogists.