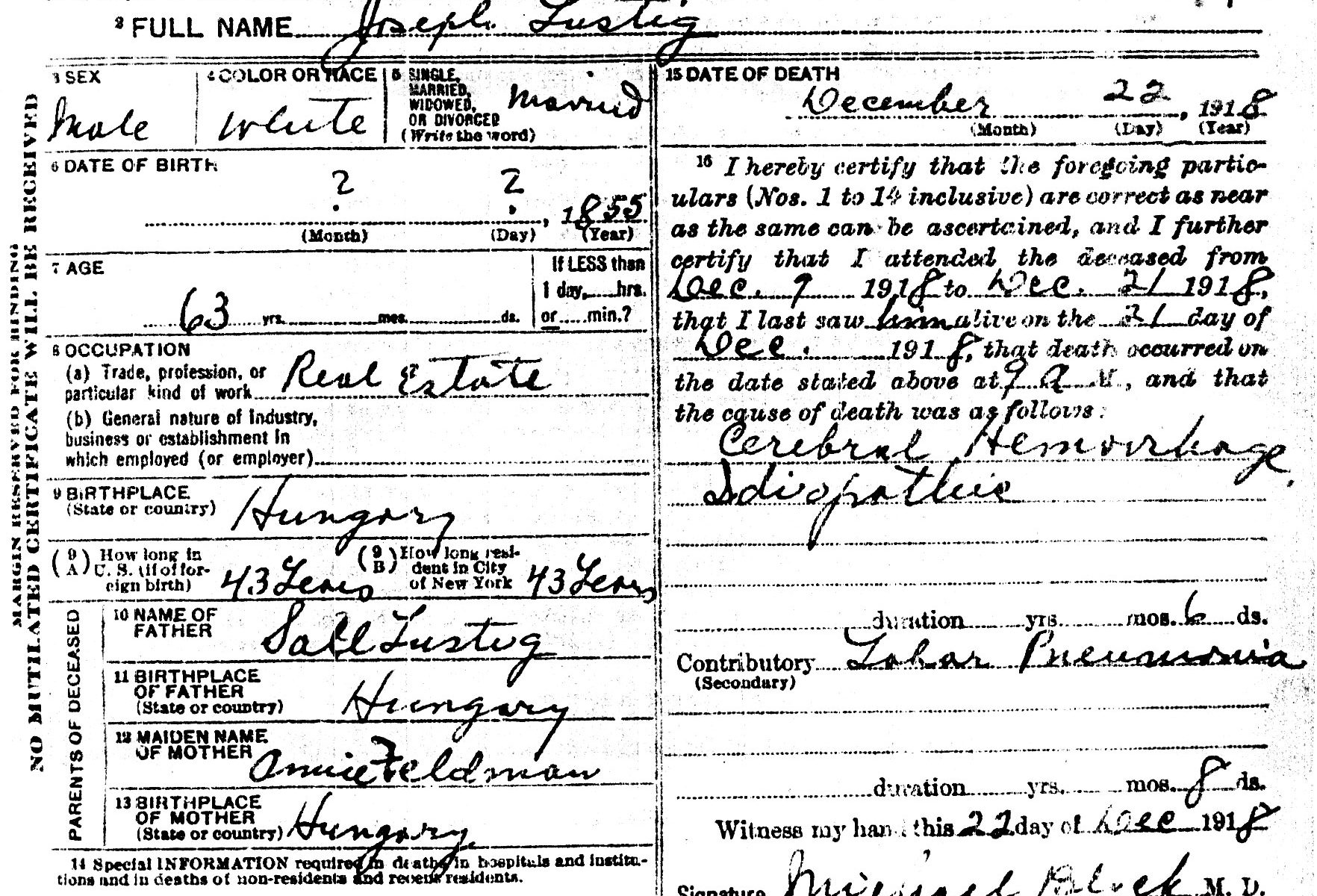 I wrote last week about the difficulty I had reconciling what I thought to be Eliza Lustig’s death certificate with the Eliza Sturmwald Lustig I had come to know as my second great grandmother. Death certificates are notoriously inaccurate, and it’s understandable. The informant providing the information to the Department of Health is often either grief-stricken and unable to recall obscure facts, or not close enough to the deceased to know the answers.

With information on the certificates contradicting known facts, it becomes much more difficult to say with certainty that the certificate is pertinent. Other clues might help, and the death certificate I received last week for Joseph Lustig is full of clues.

The death certificate does not list Joseph’s residence, only the location of death. The certificate identifies the place of death as 75 Second Street, a tenement in Manhattan. The doctor who signed the certificate indicates he had attended Joseph for three weeks leading up to his death, and the picture I’m drawing in my mind is that this doctor, based on 7th St., visited Joseph frequently until the time of his passing, if this in fact my second great grandfather.

So I’m looking for a Joseph Lustig most likely living in New York not far from this address. The 1915 New York Census and the 1920 Federal Census are good places to start, as I look for relatives — or Joseph, himself — living in the area. In June 1915, Joseph lived at 210-212 East 2nd Street in Manhattan, but his daughter Sadie lived with her husband and family at 71 2nd Street. That’s a distance of only two and a half long city blocks. I’m thinking the location is right.

Is there any other Joseph Lustig — a 63 year-old real estate agent — living in the area in 1915, born around 1855, that I could reasonably assume might be the Joseph who passed away at 75 Second St.? According to the index to this census on Ancestry.com, there are no other Joseph Lustigs who fit that description.

Other clues allow me to positively identify this Joseph Lustig:

Marriage certificates can be wrong, too. Joseph’s daughter Sadie married Joseph Landes, and their marriage certificate indicates that Sadie’s father is Rüben Lustig. That may be a middle name or a Hebrew name (ראובן), but I’ve found no evidence of that so far.

The date and time is right for this certificate and record to apply to my second great grandfather, and therefore, I am accepting it as valid.