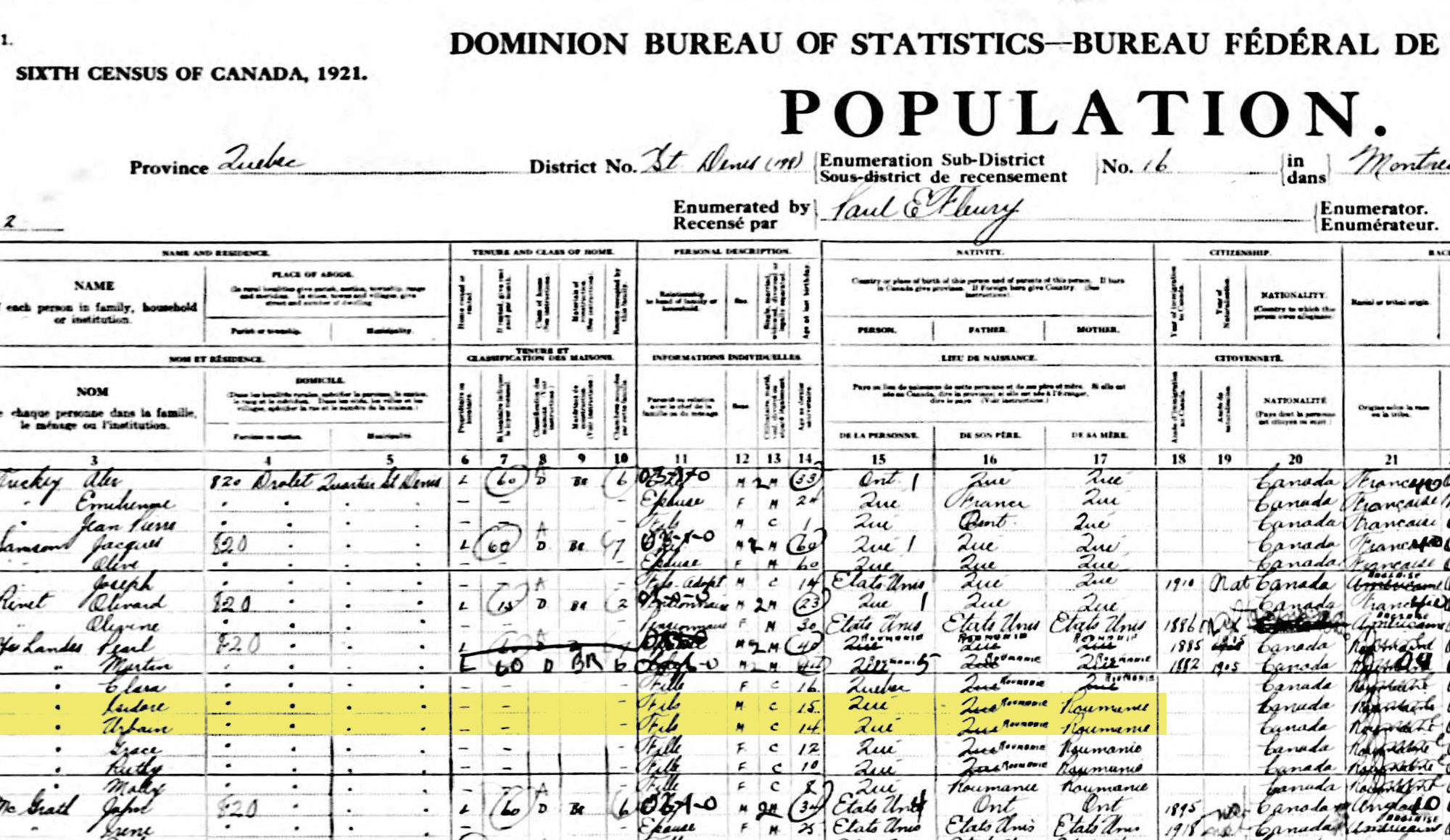 It started with what I learned by asking questions of relatives about what they remember of the family. To everyone’s knowledge, my second great uncle, Martin Landes, had four children: Clara Landes Spiegel, Irving Landes, Grada Landes, and Molly Landes Cook. There’s ample documentation of these cousins, growing up for the most part in Montéal and Detroit, Michigan.

I also found another daughter, Lillie Landes, who only lived to the age of seven and who became known as Ruthie before she died. It’s not surprising none of my living relatives had known about her; she died in 1917.

But the conflicting information about Irving Landes has been difficult to reconcile. Is it possible there was another son at some point? He’s listed in the Canadian census, but disappears. Here’s what I know.

Living relatives acknowledge Irving. He was born in Canada, moved to Detroit, was naturalized as a United States citizen, and died (most likely without children and without having married) in Detroit.

On Irving’s petition for naturalization, completed on 31 Jul 1928, he lists his date of birth as 13 August 1903 and his birth place as Montréal. Two years earlier, he completed his declaration of intention for naturalization, with the same information, though he spelled and signed his name as Irvin. The same date of birth appears in the Social Security system and the Veterans Administration.

But going back farther in time, there’s other information. In the 1911 Canadian census, the family contained a son, listed as Isidore, born in April 1903. April or August — if this were the only inconsistency, the resolution would be easy. The 1921 census left me curious. Isidore is in this record, too, with the age of 15, which puts his birth date in 1906 or 1907.

But Isidore isn’t alone. There’s also a listing for “Urbain Landes,” which to me, sounds a lot like Irvin or Irving. He’s listed as 14 years old, so born after Isidore.

Birth records for both Isadore and Irving should set the record straight. But all I’ve found is a synagogue record for Isack Landes, which I also looked at towards the beginning of my family history search. I haven’t found a record for Irving, or Isadore, or Erwin, or any other variations of the two names that have popped up in other records.

The one birth record shows that Isack Landes was born on 1 Jun 1903 (the “firsth day of June 1903 and registered on the seventh day of June…”). Obviously June 1 and August 13 of the same year can’t be dates of birth for two siblings. So there was some evidence that Irving was born in 1904. But if they’re the same person, only one date of birth would be possible.

By 1926, the family’s patriarch, Martin Landes, was naturalized in the United States. On his form, he listed his children, including just Clara, Irving, Grada, and Mollie. Irving’s date of birth is 13 August 1903.

And here is the grave marker for Irving, photographed in Oakland, Michigan with snow on the ground, where his name in Hebrew is יצחק, Yitzkhak, or Isaac. It seems to me the birth record, the registration of which is the closest in time to the actual event of his birth. But also if they’re the same person, and there is only one Irving/Isack/Isidore/Irvin/Erwin/Urbain, how could the 1921 Census of Canada list two people? Why would the census-taker invent a person?

Want more details or to see my research? My tree is public for members of Ancestry.com.

What do you think?