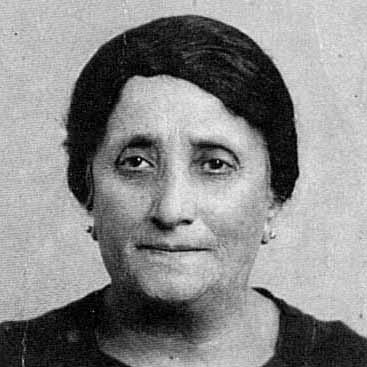 About ten years ago, maybe longer, my father sent me an email containing a graphic depicting the family tree of Pearl Kerstman Rosenberg, his mother’s father’s mother. It contained a wealth of information about her branch. When I started building my own family tree last year, I remembered receiving this email. I’ve done a pretty good job of keeping all of my personal email I’ve received since about 2002 or 2003 thanks to the virtually unlimited storage provided by Gmail. I searched through all my old messages, but the Kerstman family tree was nowhere in these vast archives.

Only a few months ago, a chance search on Google uncovered not only the family tree I had seen years ago, but accompanying photographs and stories as well. Most of the information on this tree, as I’ve been able to see now, pertains only indirectly to the Kerstmans. Pearl had only one son and no daughters with the Kerstman progenitor, but went on after her first husband’s death to become part of the Rosenberg family. The Rosenbergs comprise the majority of this family tree, but thanks to the work of the Derow family, who organized this information as far as I can determine, I now have starting points with which finding information about the Kerstmans will be easier.

According to notes on the website, my second great grandmother Pearl (or Pauline) was from Ukraine, which was at the time part of the Russian Empire. She married Shlomo Kerstman and they had one son, Isadore. Shlomo was reportedly killed after he was hit on the head by a Cossack. It will be hard to find a record of this as a fact, but stories and rumors certainly make family history more interesting. After his death, Pearl came to the United States with the help of a marriage broker to marry Morris Rosenberg. Isadore came with her.

In addition to the above anecdotes, Jon’s tree provides important dates that allowed me to find more sources pertaining to my relatives. I’ve also spent some time looking at the Rosenbergs, despite their being related only through Pearl’s second marriage, and uncovered more family drama, this time supported by historical records. One Rosenberg descendant was a radio talk show host who was “listed” as an alleged Communist during the McCarthy era. His name is on the “Red Channel” list, but the name not the name he was born with; he changed his name anagrammatically (William Margolis became William S. Gailmor) after establishing a police record for an unrelated, non-political matter, according to newspaper clippings critical of his radio show commentary. These clippings consist of letters-to-the-editor in various newspapers, mostly written by the same individual who certainly had a personal issue against William.

The Rosenbergs and Isadore’s family often lived together or at the same address, as I’ve discovered through census records.

There is more information about the Kerstmans left to be discovered, however, so I am focusing on my direct ancestors and their descendants. For example, I still need to find a record of Isadore and Pearl’s entry to the United States, let alone any evidence of their existence in the Russian Empire. There is, as I discussed with my first cousin once removed a few weeks ago at a relative’s Bar Mitzvah, a chance that “Kerstman” is a misspelling of Kurtzman, but so far I haven’t had any luck locating immigration documentation.

I have on order from New York City Pearl’s certificate for her marriage with Morris Rosenberg. This might provide her maiden name and perhaps more clues into her past in Ukraine.

One Reply to “Pearl Kerstman Rosenberg and her descendants”