I have to admit that I haven’t had a lot of time for family tree research over the last few years. The result is that progress has been slow.

But as more and more people are sharing their own research on Ancestry.com, I was able to stumble upon some proof that confirmed the theory I posited in my last entry way back in March 2016. (Has it really been that long?)

The crux was that the inscription on the headstone for my third great grandmother (my mother’s father’s father’s mother), Feige or Fannie Berman, included the words “our beloved aunt and grandmother.” At the time, I was unaware of Feige having any siblings. And research was difficult because sources (her son’s marriage certificate and her own death certificate) gave her two different maiden names (Short, and Slobus, respectively).

Looking for siblings, I turned to FamilySearch as their vital records for New York City often include parents’ names in the index. (Ancestry.com should get on that.) I used loose search terms, and found an entry for Chaia Sarah Stein that matched the conditions. And the entry provided a maiden name of Slawitz, which when pronounced using the German “w” (a “v” sound in English) — as it would have been. Slawitz could be easily misheard as “Slobus.”

But whether Feige and Chaia Sarah were siblings was still not “proven.”

Even though I haven’t had a lot of time for deep family tree research these past few years, maybe once a month I have been logging into Ancestry.com to look at hints, mostly just for direct ancestors. When relevant new records are added to the Ancestry.com database, I’m more likely to find some time to peruse and look for new clues, just as I did when Reclaim the Records successfully obtained New York City marriage license indexes, which were later added to Ancestry.com.

Some new hints in my “research only” tree on Ancestry.com — one where I put information that I think might be relevant but for individuals I haven’t yet connected definitely to my family — indicated someone else had some information on Chaia Sarah Slawitz Stein. 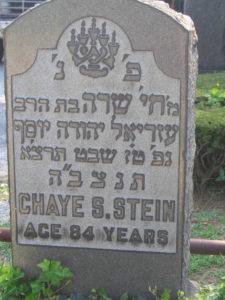 It was a photo of a headstone — something I could have found if I had gone to Montefiore Cemetery myself to look for it. Even this wouldn’t have been at the top of my headstone search list with other confirmed relatives to seek. And anyway I haven’t had time for these cemetery adventures in a long time.

Chaia’s headstone gave the same detailed father’s name. Well, Feige’s father was listed as ר’ עזריאל יוסף יהודא, while Chaia’s headstone reversed the names and spelled “Yehuda” incorrectly (ר’ עזריאל יהודה יוסף). But the comparisons between the two headstones we well as the similarities in the vital records — plus other records that indicated that it was likely both Feige and Chaia came from the same region of Europe — gave me enough confidence to declare that Chaia was Feige’s sister.

The researcher on Ancestry.com who had the photo of Chaia Sarah’s headstone shares more documents pertaining to her family. That gave me a starting point for performing a limited amount of my own research, and I’ve been able to fill in more details. The naturalization records for Chaia Sarah’s son, Samuel Stein, shed more light on the family, though some of the dates (birthdates of Samuel’s children) don’t match the information in the other researcher’s tree. The immigration information was helpful, though.

And as another stroke of good confirmational fortune, this other researcher had also had his or her autosomal DNA tested at Ancestry.com, and we matched as “4th to 6th cousins, high confidence.” I generally don’t look at DNA matches in that range as it’s unlikely I’d be able to confirm anything, but this helped confirm my suspicions about our relation. I’ve sent a message to this researcher introducing myself as a cousin — I hope to be able to exchange even more information.

Note: Chaia Sarah is at times spelled Chaia, Chaye, or Chaja; Sarah, Sara, or Sura. There has been no uniform way of transliterating names from Yiddish or Hebrew, and even spelling in Yiddish or Hebrew can be fluid.

For me, the lesson is to continue putting those strong hunches in a separate “research-only” tree and keeping up with occasional research. You never know when you might find a previously unknown relative — and welcome more cousins into your family.