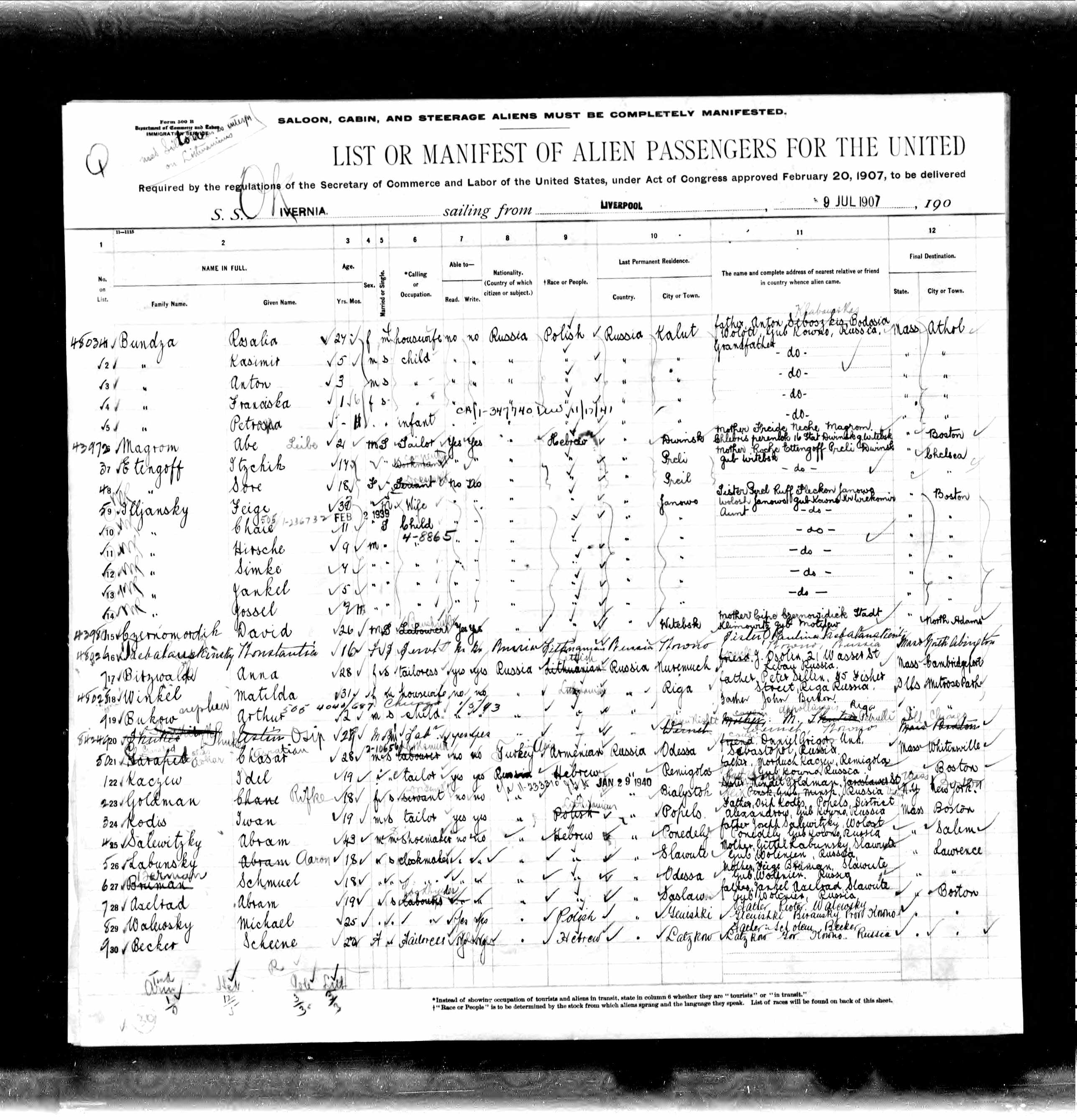 Using tools on Fold3, I discovered Samuel Berman’s (my great grandfather’s) naturalization papers. Samuel declared his intention to become a citizen in 1912, and in 1916 completed his Petition for Naturalization, was informed of his approval, and signed the Oath of Allegiance. I hadn’t come across these documents in any other searches so far, including on Ancestry.com, stevemorse.org, and other tools available.

The information led me to discover Samuel’s immigration information. According to the Declaration of Intention, Samuel was born in Odessa, Russia (now in Ukraine). The city was also new information to me. He departed for America from Liverpool, England, on the ship Ivernia, and arrived in Boston on 18 Jul 1907. The address in New York confirms this naturalization information pertains to the Samuel Berman who is my great grandfather.

This brought me back to Ancestry.com, where I searched this ship and year to find Samuel listed among the ship’s passengers. I found a Schmuel Berman listed within the manifest. I am confident that Samuel would possibly travel under the name Schmuel. From my family’s collection, I have evidence from his son’s marriage (Seymour Berman with Vivian Klein). The ketubah lists Seymour’s Hebrew name as יהושוע בר שמואל (Yehoshua bar-Shmuel).

He traveled with a cousin, Aaron Labunsky. The pair listed Aaron’s sister, Odella Labunsky, living in Lawrence, Massachusetts, as their final destination. Schmuel lists his closest living relative in his hometown as Feige Berman. It’s likely that this is a match with Fanny, Samuel’s mother’s American name as it has been told to me by living relatives.

If Schmuel’s destination was Lawrence, he didn’t stay long. He arrived in Boston in 1907, but by 1910 was enumerated in the Federal Census living in New York with his mother.

I have yet to find any trace of the Labunskys in Boston or New York. I also do not know how Aaron Labunsky is connected to Schmuel other than being listed as a cousin; he could either be his father’s sister’s son or Feige’s sister’s son, if he is in fact a first cousin.

Continue reading to view the Declaration of Intention and the first page of the passenger list. More documents are linked on the family tree on Ancestry.com.