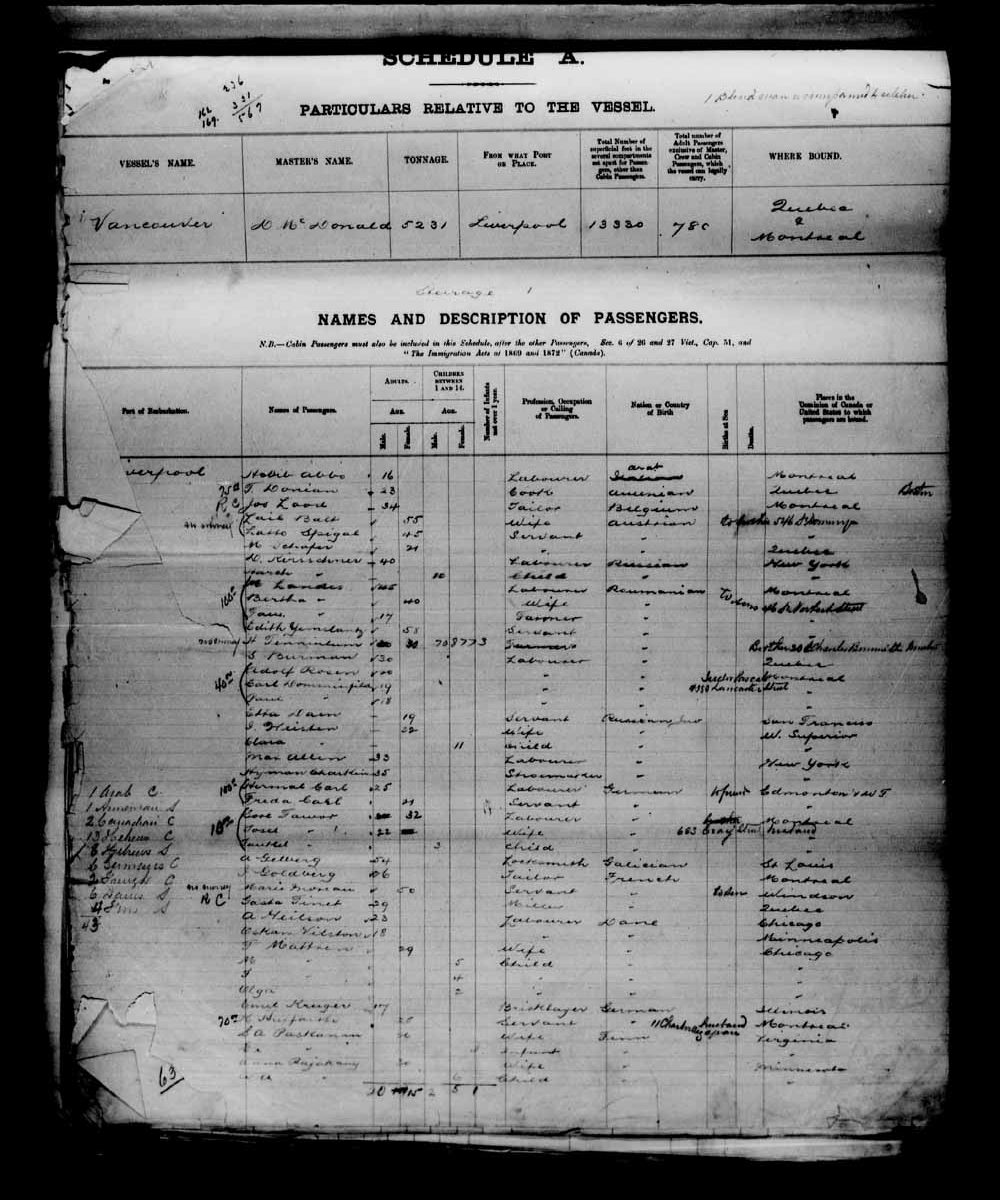 My first search of this database revealed great results. I immediately found departure documentation of my second great grandparents, Moses Landes and Bertha (Brauna) Yeruslavitz Landes, on the ship S.S. Vancouver. The couple, born in Romania, traveled from Liverpool to Montréal, and later settled in New York City.

The record shows that Moses and Bertha traveled with two companions. The first looks like it may be Sam Landes, though this document indicates the traveler is female, with an unreadable age (indexed as 22). The second is Edith Yeruslavitz, a housekeeper, age 58. Could this be Bertha’s mother? Or perhaps her aunt? Or (or and) maybe the mother of Martin Landes’s wife Pearl Yeruslavitz Landes. She is listed as married, so my assumption is that she married into the Yeruslavitz family, and is thus unlikely to be Bertha’s sister.

The departure date on the record is incorrectly listed on Ancestry.com as 30 April 1900; it’s actually 30 August 1900. With this information, I was able to browse the Library and Archives Canada collection of immigration records, and I found the corresponding arrival records on 9 September 1900.

The scan isn’t at a very high resolution, but the only illegible piece of information is the street address of the Landes family’s destination. This record, when compared to the United Kingdom departure list, provides a different age for the companion Sam Landes, listed here as a farmer rather than a servant; Edith Yeruslavitz is listed as a servant rather than a housekeeper. The group’s destination is Moses Landes’s son, living on a street I can’t read.

I’d like to tie Sam Landes and Edith Yeruslavitz into the family, but I don’t know exactly where they fit yet. I have found a Samuel Landes in New York, and although records for this Samuel Landes indicate he was also born in Romania, his birth year is not the same as what is listed in either of these documents and his date of immigration would have been prior to this travel in 1900.

Finding immigration records further back for Moses and Bertha might prove to be impossible. If they traveled on foot from Romania to England, there’s unlikely to be any kind of documentation, available online or not, of their travels.