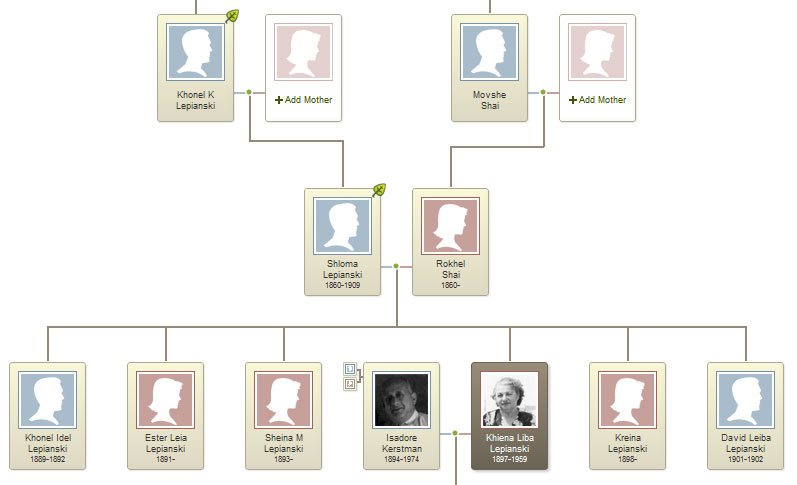 I wrote last week about receiving Anna Lipanski Kerstman’s naturalization documents, which provided new clues to follow. One of these is the name she with which she was listed when she immigrated to the United States from Jonava, Lithuania in 1911: Chiene Lipansky.

Chiene is a Hebrew name that is often Americanized as Hannah or Anna, so there’s no surprise with this information. There’s also no surprise with the idea that the last name could be spelled many different ways, from Lapinksy, to Lipansky, to Lipiansky, to Lepianski. It is this last spelling, in combination with her birth location of Jonava, that has opened new doors in research.

Thanks to the LitvakSIG and their partnership with JewishGen, many Lithuania vital records — birth, death, marriage, and some census-like lists — are available online. A “SIG” is a special interest group. Groups like these generally began as email lists (or “listserves”) that allowed people with similar interests to discuss. Like many special interests groups focused on geographical family history, the groups have worked together to digitize and index records which previously were only available by visiting towns in Eastern Europe (or by paying someone overseas to do your research — sometimes a risky proposition).

The record of her birth is off by two years, but the month and date are the same. I have a high level of confidence that the record pertains to the Anna Lipansky in my family, my great grandmother. I mentioned in last week’s article that the ship manifest for her immigration listed her mother, Rochel, as her closest relative back home in Lithuania. The birth record from Lithuania lists her mother as Rokhel Shai and her father as Shloma or Shlioma Lepianski. The same parents gave birth to a number of other children, Khiena’s siblings: Khonel Idel, Ester Leia, Sheina Mikhlia, Kreina (who later came to the United States with her mother through Philadelphia), and David Leiba.

Unfortunately, David and Khonel, the two boys of the family, did not survive beyond a few years old. That guaranteed the end of the Lepianski/Lapinsky name into the future, at least as descendants of Shloma. Shloma did have brothers, but I have not yet had a chance to explore his siblings in detail.

What I’ve been able to find are indexes, and these are not as definitive as the original records. Some original birth, marriage, and death certificates from Lithuania have been microfilmed, but getting hands on the images can be a process that takes months or even years. Microfilm is an old technology, and today’s imaging technology is faster and more convenient. The original records would be written in Russian, some with copies in Hebrew and Yiddish.

Taking the latest information from LitvakSIG and the Lithuanian databases into account, here is Anna’s (Khiena Liba’s) updated pedigree.