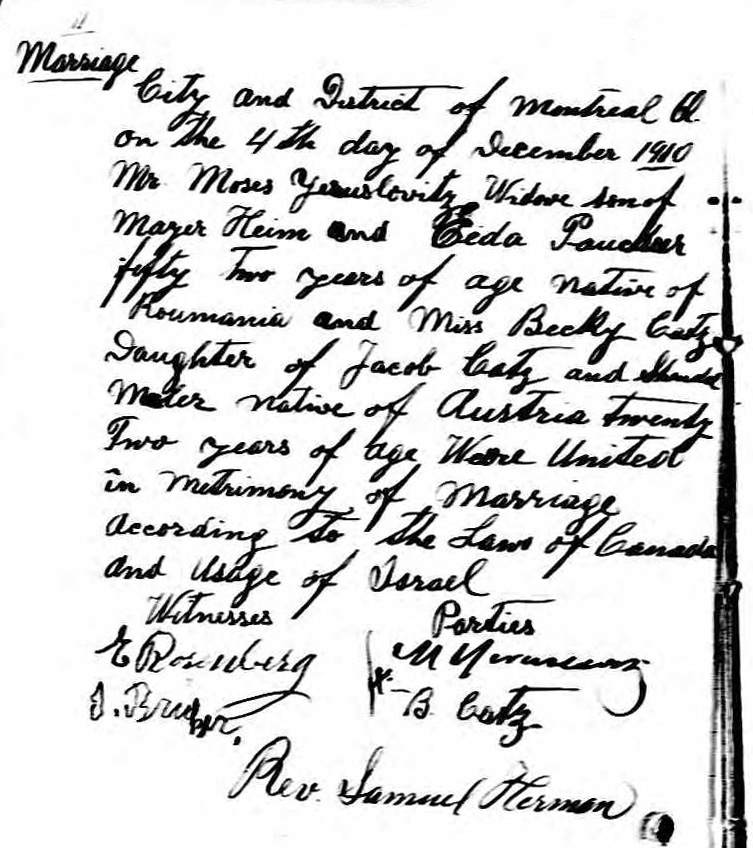 Over the past few years, a team of volunteers have been translating and transliterating Jewish vital records from Iași, Romania. The effort is ongoing, and last year, the coordinator of this effort made some of these records available to the public through the JewishGen website. Among these records, I found a marriage listing for my second great grandparents, Moses Landes and Bertha (Brauna) Yeruslavitz.

The names were spelled differently in the record, so I’m lucky I was able to find it.

The record names Brauna’s parents, Meer (Meier) and Eidil. This is the first time I was able to confirm her father’s name. So far, this is my starting point for the Yeruslavitz family, living in or near Iași in the middle of the nineteenth century.

When I added these names into my tree on Ancestry.com, I was able to find additional information. I am considering the possibility that Eidil might be the individual who immigrated to Canada from Liverpool with her daughter in 1900, as the record includes Edith Yeruslavitz with an age that might be the appropriate age for Eidil at that time. Based on Bertha’s brother’s marriage record in Canada, Eidil’s maiden name may have been Paucker.

What follows is a description of the known descendants of Moses Yeruslavitz, the son of Meier Yeruslavitz and Eidil Paucker, and Bertha’s older brother. To complete the Yeruslavitz history, it’s necessary to also follow the path of Meier’s daughter, Bertha Brauna, who married Moses Landes. The progression of Moses Landes and his descendants is found within the Landes family history.

Canadian marriage records informed me that Meier and Eidil had a son in Romania, Moses Yeruslavitz, who immigrated to Canada and was living in Valleyfield and Montréal. Moses first married Rosa Haaze (Hayes), and after she passed away, he married Becky Katz. These records also indicate that Eidil had passed away by 1893, the year Moses married Rosa, which casts doubt on the identity of Edith Yeruslavitz in the passenger list.

The name Yeruslavitz has never been spelled consistently in English on official documents. I eventually chose to conform to this spelling of the name as I found more records pertaining to the descendants of Moses Yeruslavitz.

Moses had three sons and two daughters with his first wife: Léon (Jack), Martin, Joseph, Fanny, and Ruth; he had two sons and one daughter with Becky: Max (Mendel), Jacob, and Rachel. After Moses Yeruslavitz died in 1918, Rosa’s children stopped using the name Yeruslavitz consistently, adopting their mother’s maiden name Hayes as a last name.

I found a Canadian document that appears to function as a probate record, listing some of Moses’s property and how it would be distributed to his relatives upon his death. It doesn’t include specific relationships, just names, and includes a Sarah Yeruslavitz. Sarah is identified as the wife of a Mr. Greenberg, and I haven’t been able to find any additional information about them.

Another researcher has identified a Sarah Yeruslavitz who may be Moses’s half-sister, sharing the father Moses, who was also known as Meier Chaim or perhaps Chaim Meyer. This Sarah married Aaron David Barat. Her maiden name is spelled on her death certificate as “Sarasloff,” with parents named as Chaim Meyer Sarasloff and Sussie Blaustein. I have found a record on JewishGen that shows Meier Yeruslavitz married to Simi Sosa, as the parents of Aron Yeruslavitz who married Hana Kaufman.

I haven’t added this Sarah to my tree because I’m still not confident that it’s a match to my Yeruslavitz family. There are still too many questions in my opinion. Additionally, the researcher who has been working on Aaron David Barat and his descendants should have matching DNA with me, but doesn’t. That’s not proof that we’re not related through this path, but it doesn’t add to my level of confidence. But could she be there Sarah who’s mentioned in Moses’s probate document? If so, who is Mr. Greenberg?

Back to confirmed relatives.

For Moses’s children, some travel records include both names, with one or the other as an alias. Becky married Benjamin Rosenblum, and her children with Moses took on Rosenblum as a surname. Becky and Benjamin also had a biological daughter, Sara. This Sara Rosenblum is not the same person as Sarah Yeruslavitz mentioned above.

Léon married Rebecca Webber. The inscription on Rebecca’s gravestone reads: “Beloved wife of Max and devoted mother of Alan and Marcia.” Marcia Rosalie Hayes is a daughter of Léon and Rebecca, but the rest of Léon’s history is unclear. I believe I’ve identified his burial location, where is headstone reads “Leon Jack Hayes,” and his death is in 1949. But I’m not sure what happened with Léon between the birth of his daughter Marcia and his death. Rebecca married Max Webber (same last name), and they had a child, Alan Webber. But did Rebecca and Léon get divorced? I imagine so, but I haven’t verified this.

Marcia Hayes married Harris Goldberg, and Harris had a daughter named Marjorie who died about 1975.

The only information I’ve found regarding Martin Yeruslavitz consists of the 1901 and 1911 Canadian Census records as well as a mention in the licitation for Moses’s property in 1929; for Joseph, all I’ve found is the 1901 census.

Max (Mendel) Yeruslavitz became known as Max (Mendel) Rosenblum. He moved to Pennsylvania from Canada and married Matilda Fisch. They had at least three children, and I’ve found the names of two.

For Jacob Yersulavitz, I have found nothing more than his record of birth from the Beth David Synagogue in Montreal.

Rachel Yeruslavitz took the surname of her step-father, and became known as Rachel Rosenblum. She moved to New York from Canada and married Benjamin Weiner. Rachel (Rae) and Ben had three children. One happens to be a public figure, so there are no concerns about identifying him here. Michael Alan Weiner is a son of Rae and Ben. Michael and his second wife, Janet Roll, have two children. Michael Alan Weiner changed his name and is known now as Michael Savage. He hosts a popular right-wing radio program. The family is also associated with the Rockstar energy drink.