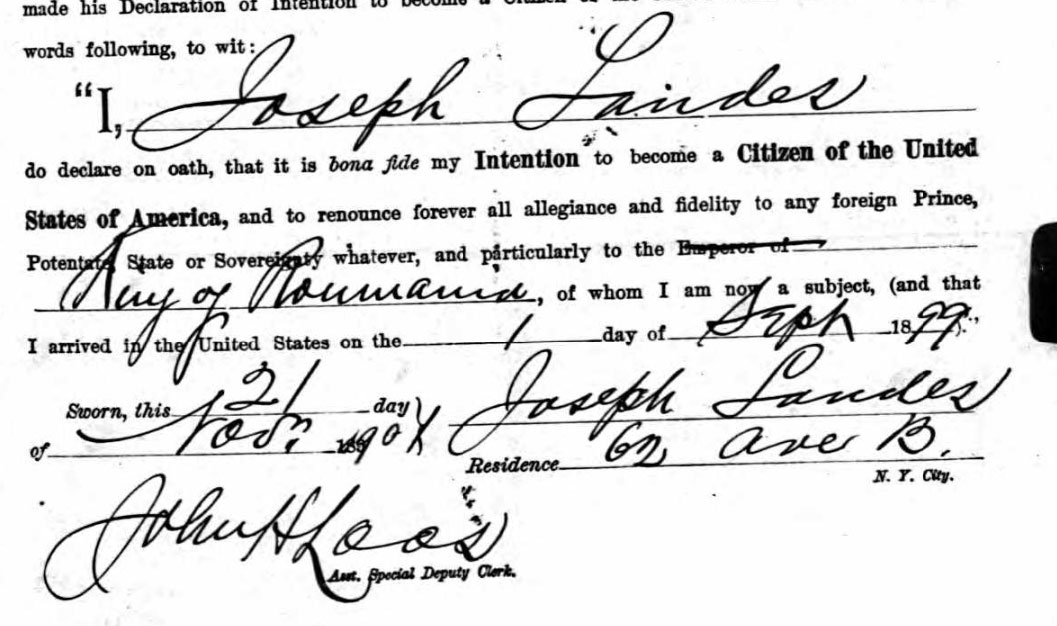 According to his naturalization documents, my paternal great grandfather, Joseph Landes, arrived in the United States on 1 Sep 1899.

A search on Ancestry.com revealed a Josef Landes, a 21-year-old Romanian student born in Iași, who departed Hamburg on 20 Aug 1899 on the ship Palatia. This must have been a recently indexed document because the search result did not look familiar to me. The Hamburg passenger lists do not contain many details, but everything presented makes it likely that this record pertains to my great grandfather.

By April 1901, Joseph was living with his parents and siblings in Montréal, Canada. But he lived there for only a short time; by November that same year, he had a residence in New York and was declaring his intention to become an American citizen. Until now, I had not found an Ellis Island immigration record for Joseph, but now potentially with the name of his vessel, I could browse through the images on Ancestry.com. Many of these immigration records have not been indexed, so research requires looking through the manifest page by page.

After some browsing, I found the record for the Joseph Landes who arrived in New York on 1 Sep 1899 on the ship Palatia.

The record obviously pertains to my great grandfather. It indicates Joseph is a medical student heading to Montréal, where his brother Martin Landes is waiting for him. Everything adds up. As a result, I have some more thoughts about the experience of my Landes ancestors.

I noted previously that Joseph was a pharmacist and that he was an organizer for the landsmanshaft First Bacauer, K.U.V. It seems likely that Joseph, now confirmed to have been born in Iași like his siblings, studied pharmacy in Bacău until he was 21. At that point, he joined the rest of his family in North America.

Joseph Landes’s immigration details were missing from my records, so this find is particularly satisfying. I still have many questions about my ancestors, and after this discovery, I may find myself spending more time looking for missing immigration records by browsing the images of the record books page by page.

With the indexing of the Canadian Census of 1920 now complete on Ancestry.com, I was able to find the family of Martin Landes, my great grand uncle. He was a traveling salesman who split his time between Detroit and Montreal, eventually moving to Detroit permanently and gaining his U.S. naturalization.

The 1921 census raised more questions. I’ve already identified children of Martin who were not included in the oral family history eventually written down by my grand uncle Mortimer and his sister Edith.

Lillie shows up in the Canadian Census of 1911, as does another son of Martin, Isadore. Does Isadore refer to Isaac (Isack) or Irving, a known son of Martin? The ages in the census don’t help. In 1921, the Canadian Census includes listings for Isidore, Urbain, and Ruthy in addition to the other known children of Martin, Clara, Grace (Grada) and Molly. If Urbain is simply a mishearing of Irving, that would mean Isadore refers to Isaac. Ruthie could refer to Lillie.

Now, it’s likely that Isaac and Lillie died young because those names were never known to Mortimer. Furthermore, there is an interesting Jewish tradition where the names of sick children are changed, superstitiously, to try to avoid death’s arrival — to trick death. Isadore could be the boy born Isaac and Ruthie could be the girl born Lillie. But that presents a new question: where is Irving in the Canadian Census in 1911?

With the assumption that Ruthie refers to the girl born with the name Lillie, there is a Ruthie Landes buried at Back River Memorial Gardens Cemetery in Montreal, with a reference to the Beth David synagogue, which is the same synagogue that holds many of the Landes children’s birth records. This same cemetery is the home to other, more distant relatives. There is no date on this record, so it might be worth a call to the cemetery to find more information.